SANDRA NEIL WALLACE IS AN AUTHOR AND ADVOCATE for change. Known for her investigative journalism and original narrative style, her books for young readers focus on people who break barriers and change the world. As the daughter of a refugee and concentration camp survivor, Sandra became a changemaker herself. The first generation in her family to attend university, she became a journalist, anchoring the network news before shattering the glass ceiling in sports television as the first woman to host an NHL broadcast on national TV. Her books have won national awards including NCTE's Orbis Pictus Award for Outstanding Nonfiction, the NCSS Carter G. Woodson Book Award, SCBWI's Golden Kite Honor Award, and ILA's Social Justice Literature Award, and been chosen as Outstanding Science Books and Best Books by the American Library Association, Kirkus, Booklist, and the New York and Chicago Public Libraries.

Sandra became a U.S. citizen in 2016 and advocates for social responsibility in her community as co-founder of The Koenig Siddall First Generation Scholarship Fund, and The Daily Good, an all-volunteer non-profit bringing 20 thousand culturally diverse foods to college students each year, through its Global Foods Pantries at New Hampshire colleges. She is the recipient of the Outstanding Women of New Hampshire Award for peace & nonviolence and the Keene Sentinel’s Extraordinary Women Award. Sandra lives in southern New Hampshire with her husband and frequent collaborator, author Rich Wallace.

Since breaking a gender barrier in sports as the first woman to anchor an NHL broadcast on national TV, Sandra Neil Wallace has been writing stories about people who break barriers and change the world. She is the author of the Orbis Pictus Award-winning book Between the Lines: How Ernie Barnes Went from the Football Field to the Art Gallery, illustrated by Bryan Collier, which earned 4 starred reviews and co-author of the Orbis Pictus Honor Winner The Teachers March!, and the Carter G. Woodson awarding-winning book, Race Against Time. Her young adult nonfiction title, Blood Brother, won The International Literacy Association's Social Justice Award and was a YALSA Award Nominee for Excellence in Nonfiction. The daughter of a Yugoslavian refugee, Sandra lives in New Hampshire where she continues to break barriers and create change as co-founder of The Daily Good.

Since 2010, SANDRA NEIL WALLACE has inspired thousands of young students and burgeoning writers as a guest author and writing workshop leader. She is a presenter for the literacy non-profit CLiF (Children's Literacy Foundation), and builds literacy initiatives as co-founder of THE DAILY GOOD's Summer Feed and Read Aloud program. To best support educators in the classroom, Sandra continues to create her popular, pre-recorded Book Talks and Read Alouds centered around the hidden heroes in the nonfiction picture books she co-creates. 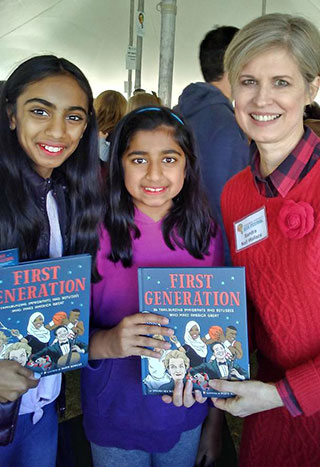